Winamp media player is no more after AOL decided to close the company on December 20, 2013, saying goodbye to 15 years of good and loyal service to the public.

For the millions of people who used this player, whose glory days were in the 90s, it’s time for some meditation. Before finally drawing a line through Winamp, here are 5 things that only true fans of Winamp will understand.

Personalizing the audio player with customizable skins was, on paper, an excellent idea, and the creativity of Winamp community members knew no bounds.

In the late 1990s, download sites even provided special sections dedicated to the NullSoft audio player. From football teams to race cars, landscapes to futuristic imagery, the choices were endless.

Here’s a small selection of “skins” from the past that you’ve probably already seen online.

There’s no doubt that the “View” mode was the first thing that all Winamp fans proudly showed their friends and relatives, back in the days when animations moving in time to the music was kind of a big deal.

Like all other Winamp users, there’s a good chance that you stayed glued to your screen at least once, trying to guess what the psychedelic sound waves would do next. 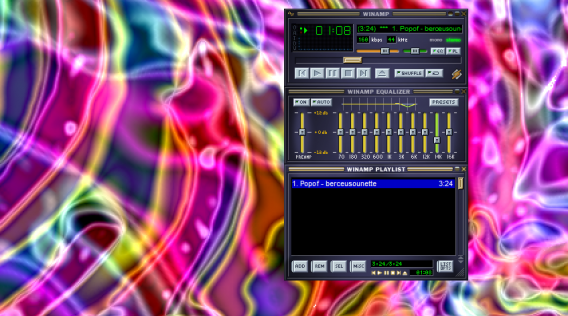 Winamp was the mark of the MSN generation, who spent ages configuring eMule and Kazaa to settle down for hours in chat rooms, playing Minesweeper, and listening to their favorite radio station on Winamp. These people will always remember the Winamp “mini-player”, the tiny bar that controlled the majority of the music player’s options. We also remember that the “Minimize,” “Reduce,” and “Maximize” Winamp buttons were anything but clear.

One wrong click and the mini-player wasn’t so mini

Some faithful Winamp users unwisely decided to download the first versions of iTunes to try. They quickly discovered that iTunes cost patience as well as money. To download iTunes using a 56K connection, it took at least thirty minutes, time which, in those days, would be deducted from your 20-hour monthly package.

Many users can testify that opening iTunes for the first time was a shock in more ways than one. It was significantly slower than the very light Winamp, and iTunes quickly ended up in the trash. The most savvy Winamp users always maintained an aversion to iTunes. Now that Winamp’s on the way out, the most similar replacements would probably be AIMP or foobar2000.

“Winamp: it really whips the llama’s ass”. Sound familiar?!? This jingle was the catchphrase of a generation. How many of us have joyfully repeated the jingle, despite not being sure what it really meant! If you’re interested, the llama is the mascot of Winamp’s original developer, Nullsoft.

Despite the closure, all is not lost for fans of Winamp- you can still install the media player until 20 December. After this date, no updates will be released but users can keep Winamp as the default media player on their PC.

What’s the first thing that comes to mind when you think of Winamp?